Charles Delaunay, the son of artists Sonia and Robert Delaunay, was born in Vineuil-Saint-Firmin, Oise, France in 1911. Although he began his career as a commercial artist, Delaunay’s life was transformed after attending a Jazz concert. In the early 1930s, he began to work as a Jazz promoter, and co-founded the Hot Club de France with Hugues Panassié. The Hot Club de France was both a concert venue and an association of jazz enthusiasts. Delaunay recruited a relatively unknown Django Reinhardt to join the Quintette du Hot Club de France. In the mid-1930s, Delaunay and Panassié co-founded Le Jazz Hot, which is now the world’s oldest jazz magazine. He organized recordings throughout the 1930s and... more.

We have one object that Charles Delaunay has been involved with. 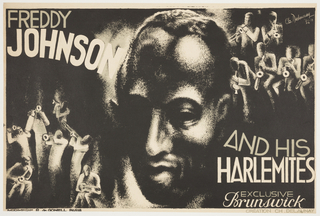