Born in 1861 in Tallmadge, Ohio, Clara Wolcott Driscoll was among the many young women who flocked to New York City in the late 1800s seeking respectable careers, particularly in the burgeoning field of industrial arts. After graduating from Cleveland's Western Reserve School of Design for Women in 1882, she attended the Metropolitan Museum Art School in New York City and was hired by Tiffany around 1888. In 1892 she was appointed head of the newly-formed Women's Glass Cutting Department, which eventually employed as many as thirty-five women. In addition to managing a large staff, Driscoll was responsible for creating designs for a wide range of objects and, in fact, designed most of the firm's lampshades... more.

We have one object that Clara Driscoll has been involved with. 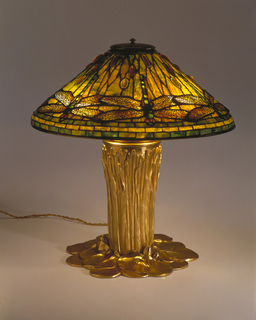