Louis Dalbet ran his family ironwork business in which Jean and André, his two sons, worked alongside four other employees. Dalbet trained at the Robert workshop. Around 1912, he worked as a journeyman in France and set up his own workshop at 4 bis Rue Capron specializing in decorative wrought-iron work. Concentrating on railings, banisters, and fireguards, he also did all the ironwork for the well-known Brasserie Bofinger. From time to time, he would design items and exhibit at the Salon d'Automne. In 1917, he was awarded the Prix de Rome for a gate he designed. A year after his meeting with Pierre Chareau in 1923, their collaboration was well under way. He was Chareau's own choice and was the only... more.

We have 2 objects that Louis Dalbet has been involved with. 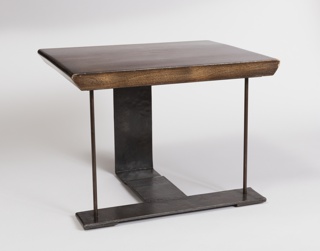