Yusaku Kamekura studied at the Institute of New Architecture and Industrial Arts, and is considered one of the founders of modern post-war Japanese graphic design. Kamekura was highly influenced by European modernist design and adopted its rationality and functionality in order to create his own unique vocabulary with a great respect on traditional Japanese art. His designs are characterized by the use of highly stylized motifs and minimalist approach such as the elimination of unnecessary ornament and dynamic composition of visual elements. By minimizing the number and complexity of components, he maximized the potential of visual language. His vision established a new stage for Japanese graphic design and... more.

We have 8 objects that Yusaku Kamekura has been involved with. 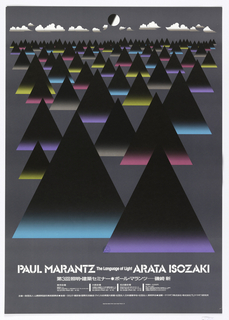