Lori studied art and then textiles at Syracuse University, from where she received her BFA. She traveled a bit and then began working freelance in Milan, where she sold designs to Missoni. Her success followed her to New York where she collaborated with the houses of Estee Lauder, Calvin Klein, and Dansk. Eventually, she was given the opportunity to work for Jack Lenor Larsen and design her own collection; she collaborated with Sahco in 2000-2012. In 2004, she launched her own brand, Weitzner Limited from which she offered wall coverings. In 2012, she launched a textile collection. Lori has designed for movie sets and for major companies, such as the Four Seasons Hotels and Google.

We have one object that Lori Weitzner has been involved with. 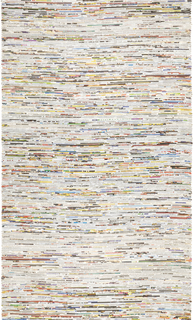