Franz Xaver Nachtmann studied at the Akademie der Bildenden Künste, München from 1814 to 1819, and worked for six years in the Nymphenburg Porcelain Manufactory as a china painter. He was one of the first German professionals engaged to paint interiors for the royal albums that proliferated in the 1830s and 1840s. He was involved from the early 1820s with developing the Wittelsbach Album for Queen Caroline of Bavaria, and made replicas of some of these views for the Hesse family album at Darmstadt. (JGK)

We have one object that Franz Xaver Nachtmann has been involved with. 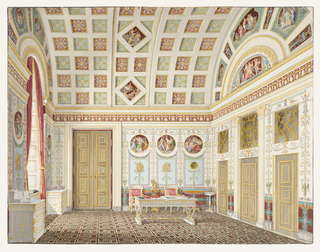