Relatively little is known about C. M. Fredro, a member of a prominent Polish noble family forced into exile during the political upheavals of the nineteenth century. A friend of Charles de Talleyrand, Fredro would have been about sixteen years old in 1836 when A Room in the Reuss Palace, Dresden was completed. Another drawing in the Thaw Collection, A Room in a Florentine Palace, came from an album which may have been assembled by Fredro’s sister and originally contained a number of his drawings. He seemed to have a talent for caricature; comical drawings record a visit that he made in 1848 with Talleyrand to Rochecotte, the French château belonging to the Marquise de Castellane. (JGK)

We have one object that C. M. Fredro has been involved with. 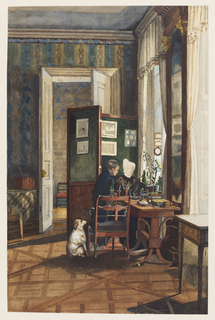