He studied at the Royal Danish Academy of Fine Arts, School of Sculpture in Copenhagen from1919 to 1922. From 1921 to 1935 he sculpted porcelain figures for Royal Copenhagen, and received numerous awards for his porcelain figures, including a silver medal at the 1925 Paris exposition. From 1936 to 1945 and from 1949 to 1965 he worked for George Jensen creating designs for jewelery and holloware.

We have one object that Arno Malinowski has been involved with. 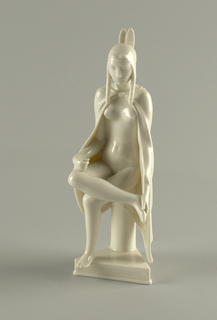