Diane Itter began experimenting with fiber in 1968. She graduated with an MFA in textiles from Indiana University in 1974. She also studied at the University of Pittsburgh, experimenting with hand-tied knots instead of loom-woven fabrics. Itter set tools aside in order to focus on the material itself. She chose to concentrate solely on one technique and one material—the double half-hitch knot and linen thread. Itter was inspired by pre-Columbian Peruvian cloth, and later incorporated elements of African, Amish and Native American textiles. Before her death, she looked to Asian influences, such as kimono and tunic formats.

We have one object that Diane Itter has been involved with. 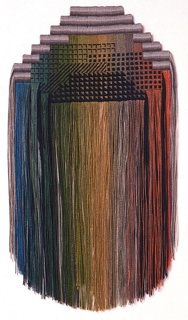