Gordon Mitchell Forsyth is one of the founding fathers of the art pottery movement in the United Kingdom. Born in Aberdeenshire, Scotland, in 1879, Forsyth began his formal training at the Royal College of Art in London. He attended William Richard Lethaby’s School of Art and Design, which was founded on the principles of both John Ruskin and William Morris. Taking to heart these philosophies of the Arts and Crafts movement, Forsyth wished to create pottery that was both beautiful and useful, as he felt that so many mass-produced objects were beset by “a conglomeration of hideousness” with “no design or sense of order.” Forsyth first had a chance to test out his design theories when he was hired... more.

We have one object that Gordon Mitchell Forsyth has been involved with. 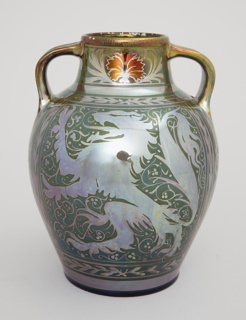