Virgil Exner was born in Ann Arbor, Michigan on September 24, 1909. An advanced student with an early interest in art, Exner graduated from high school at age 16 and attended the University of Notre Dame for two years to study art and design. With limited funds, Exner left school in 1928 and began working for an art studio and advertising firm in South Bend, Indiana. The firm’s primary client was American automobile manufacturer Studebaker, for which they produced brochures, catalogues, and advertisements. In 1933, Exner was hired as a designer at General Motors, joining Harley Earl’s Art & Color Section, where he was assigned to the Pontiac Studio. He was later promoted to Studio Manager at Pontiac and... more.

We have one object that Virgil Exner has been involved with. 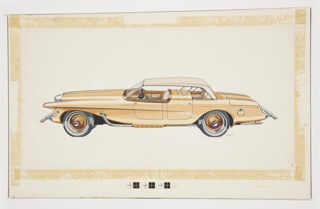